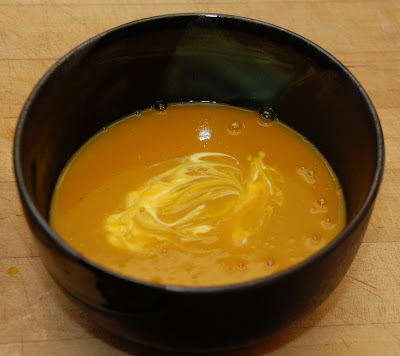 Krista provided this recipe for Sunday Slow Soupers. We tried it last night with a homemade Chicago style pizza. This is a nice easy recipe if you use a butternut squash as suggested in the title and ingredients. However since I had a really big bag of Hubbard squash in the freezer, I used that.

Let me tell you a little bit about hubbard squash. First of all, it looks like it fell from outer space and possibly houses alien creatures. Second, only someone who was told by someone they trusted would believe that there was a lovely sweet tender flesh inside. Third, this is the world’s most difficult squash to open. It’s similar to opening a dried coconut (which is easier if you use a machete). You can see what I’m talking about at http://starlightbakery.blogspot.com/2008/10/padaro-pumpkins.html where you can read the step-by-step process my sister and I used to get to the tender flesh.

This one yielded enough puree for about 24 pumpkin pies. So far I’ve made 4, so I welcomed an opportunity to use some of it in this soup.

I used fresh instead of dried ginger in the recipe but we decided that I should have used more. After blending, I used a sieve to remove the pulp. But then I put it back into the left-over soup because it tasted really good and I don’t want to waste it.

I also have a large bag full of fresh thyme on my counter, so in went a few sprigs of thyme for flavor. The garnish is Greek yogurt.

Fortunately there is still a little left, hidden in the back corner of the refrigerator behind all the furry leftovers (where no one else will see it). Now if I can just get to it while everyone else is showering or taking naps, then I won’t have to share.