My New Year’s resolution–what it’s the middle of February already?–is to use this blog to share kitchen adventures. Have I ever mentioned how much I love to cook? In my family cooking is usually a group event.

I realize that not everyone grew up in a family where aunts and uncles and grandparents were all in the kitchen together, with grandchildren at their knees begging to lick the beaters and spatulas or outside searching for sticks to roast marshmallows over the BBQ.

I have to admit that in the 1950s, the men did the outdoor cooking and the women did the indoor cooking. As grandchildren, we scurried back and forth between the two stations (after we finished polishing all the silverware and setting the table). The men also cleaned the fish. They probably would have caught all the fish too but my grandma was a really good fisherwoman, so grandpa never discouraged the women from casting a line into the lake.

To share my experience and love for cooking, I gave my daughter-in-law a couple of cookbooks for her birthday. She chooses recipes she’d like to learn and we make them together. I plan to share those stories here over the next year in the hope that it will inspire more folks to cook with their families and friends.

I also love to cook with kids. It just so happens that my son’s friend has a 7 (soon to be 8) year old daughter who comes over often to cook with me. Today was a holiday so she called me last night to ask if I would teach her how to make cinnamon rolls.

They arrived just as I finished making the dough. Dave also make a batch of whole wheat bread and set aside some of his dough for us to try as well.

So while we were waiting for the dough to rise, I told her about my new mold for making chocolate spoons so we could eat our ice cream with the spoons and then eat the spoons. She helped me temper some chocolate and pipe it into the spoon molds so we could try it out. 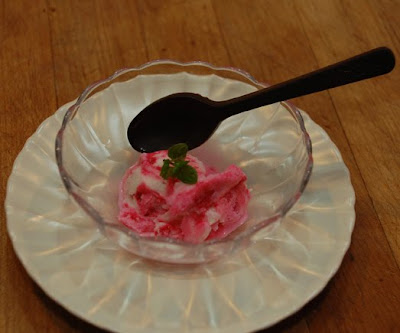 We thought the spoon would be especially good with peppermint stick ice cream and she suggested we add a “hint of mint” from the garden. We soon discovered that the spoon breaks quickly if the ice cream is too cold and chocolate tastes better when it melts quickly in your mouth. So we think the spoon would taste better with something less cold, like creme brulee.

Since we had more tempered chocolate than we needed, I showed her another new mold I’d gotten. I’ve been interviewing beekeepers lately and using some of their honey to make filled chocolates. I thought this mold looked like a beehive so I bought it.

My junior chef laser-tested the temperature of the chocolate as I warmed it back to pouring temperature. We made the shells, filled them, and then sealed them. They came out of the mold easily. I brushed a little edible gold dust onto the tops and here’s how they look. 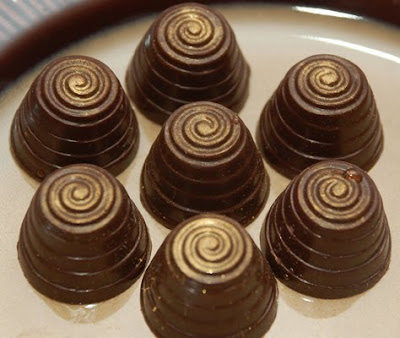 Those are reflections at the bottom, not leaking honey but I do see a droplet at the top that looks a tad suspicious. Guess we’ll have to eat them quickly.

While we were working in chocolate, her dad was fixing us a delicious lunch with lots of fresh vegetables, tofu, and Chinese noodles. It’s a good thing, because we still had cinnamon rolls to taste.

We decided to make sticky buns so we mixed up the topping, sprayed some pans with oil, and spread the topping on the bottom of the pans with lots of chopped pecans. I showed her how to roll the cold dough into a rectangle, then we covered it with a mixture of cinnamon, butter, and flour. We used a Silpat mat to make a sushi-like log and did a little work with fractions to get 8 rolls out of each log. We ate lunch during the final rise, then popped 32 sticky buns into the oven.

About 30 minutes later we turned them out onto a rack to cool. We all agreed that we were really full from lunch and ice cream with chocolate spoons, so maybe we’d wait for the buns to cool before we tried them. Okay, we didn’t wait very long. Here’s a photo. I use agave nectar in my dough and in place of corn syrup in the topping, so it’s not quite as intensely sweet as it looks, she said, knowing no one would really believe her.