You know that caramel that sticks to the inside of the sauce pan when you pour the buttery rich fragrant molten caramel onto a sheet pan to cool? Well don’t think you’re going to eat it over the sink. My friend Loretta grew up during the Depression when nothing that could possibly be used went to waste. I grew up in a family where it was the job of the grandchildren to clean the candy pan.

Loretta says her mom called her flexible Rubbermaid spatula a “child cheater.” That’s because the spatula cheated the kids of all that gooey goodness left in the pan.

“Go get that child cheater over there,” Loretta instructed me. We used it to scrape every last bit of caramel from the pan onto a plate to cool. As we cut our cooled caramels into perfect rectangles, we added the trimmings to that plate too. “That’s for the turtles,” she told me.

After our caramels were cooled and wrapped, we arranged pecans on a pan in clusters of three—to form the base of our turtles. 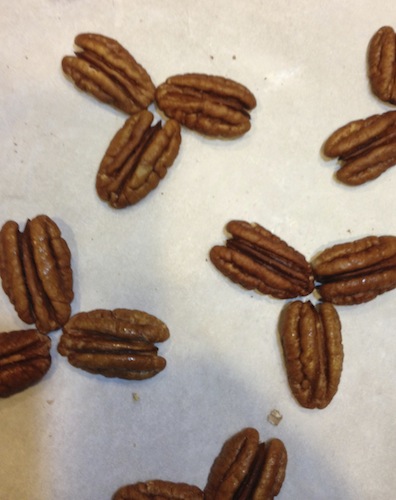 Taking a glob of soft caramel, Loretta showed me how to mold it into a ball and press it onto the center of the three pecans.

When I made them at home I used caramel that was still hot and pourable (see below). 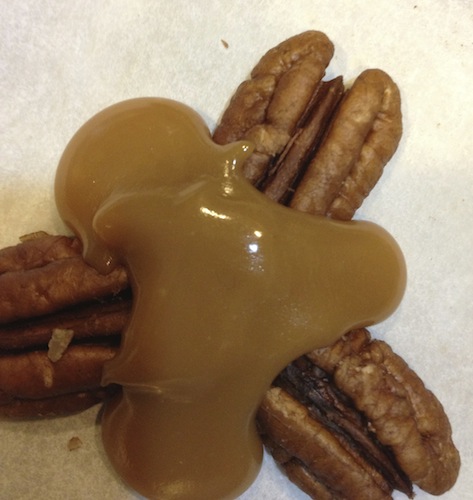 However, I like Loretta’s method better because you can make the caramel stay where you want it. Mine flowed down the sides of the pecans.

Using the microwave speeds up the melting process. We started off at 30 seconds and stirred between intervals. The residual heat continues to melt the chocolate while you stir. If you plan ahead, you can set a container of chocolate in the sunlight to melt (indoors if it’s cold outside).

Chill your turtles briefly in the refrigerator then tap the pan on the counter to get them to release cleanly from the pan. 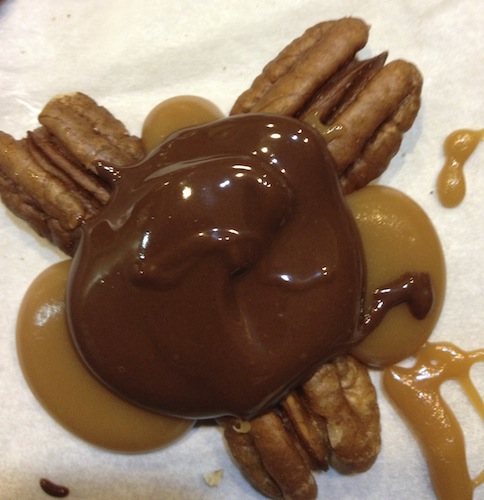 Voila! Time to test the results. It’s best not to let anyone else know you are making turtles and raise their hopes that there might be any left for them after the tasting.