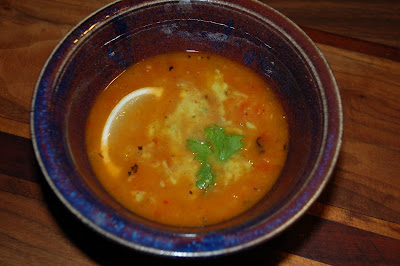 We tried Jerry’s Mexican Turkey Soup recipe tonight. Yet again avoiding the grocery store, I noted on my way to feed my compost worms their Thanksgiving Dinner that there were still some small roma tomatoes on one of our plants. I also had a can of corn niblets in the pantry, some frozen chipotle, and a few bedraggled green onions which I supplemented with some shallots. Fortunately my neighbor’s lime tree borders our driveway and there was one lying on the ground under the tree. Lucky me.

While the recipe calls for dry roasting both the corn and the tomatoes in a skillet on high heat, I chose to char my tomatoes with a torch… the kind you get at Sears. We discovered this roasting method when our kitchen was being remodeled (after trying a wood-fireplace roast and ending up with soot-covered tomatoes). It works especially well for peppers and chiles. Stick them on a fork and run them through the flame. I did char the corn, however, in the skillet over high heat because the fork thing doesn’t work on canned corn.

I put a leftover turkey wing bone in my chicken stock and let it simmer while I chopped the onions, garlic, and charred tomatoes.

The only difficult part was getting the avocado cream to sit photographically in the soup at the end.

No one seemed to care, they just wanted to try it. It was delicious.