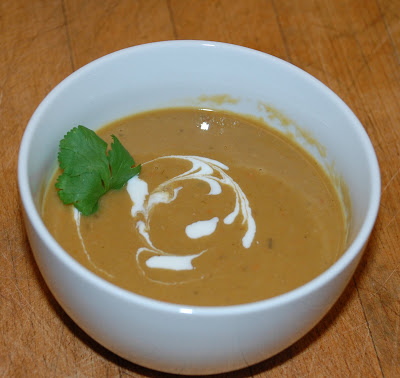 Krista Harris who writes In and Out of the Garden, told me about the Sunday Slow Soupers. Every Sunday each member makes the same soup and then writes about it. Porcini and Chestnut Soup was their first soup, scheduled for last Sunday. What? Today is Friday? Aargh, I’m a little behind but I did find raw chestnuts!

Here’s the recipe, courtesy of Amy. I made a few modifications based on not wanting to go back to the grocery store on the heaviest shopping day of the year and risk my life for a parking spot. Instead of celery, I used a few hearts of romaine. I used cilantro instead of parsley (in California we use this like parsley anyhow). We had some leftover kabocha squash from Thanksgiving (Californian for pumpkin), which I added with the carrots. I chose the sherry option at the end.

So I bought the chestnuts (early before the crowds hit the shopping center) then wished I bought a can of chestnuts when I started reading about how to roast and peel them.

I like it better when you stop on a street corner in London to buy them hot off the grill and keep them in your pockets to warm your hands. But London was too far to go for roasted chestnuts today. So I heated the oven to 400 degrees, cut a slit in the rounded side as directed by a nearby cookbook, and put them into a jelly roll pan with a bit of water.

I think I left them in the oven about 20 minutes–I was upstairs when the timer went off at 10 minutes. I was really dreading the part that says peel hot shell off nuts and then try to rub off the skin… if this doesn’t work, boil them and try again. Instead, I cut the hot leathery nuts in half and used a small melon baller to scoop out the mealy centers. The skin miraculously stuck to the inside of the shell, not the nut. Yay!!

The rest of the recipe was simple and some friends arrived just in time to join us for the soup tasting. None of us had ever had chestnut soup before and we all enjoyed it. The porcini mushrooms gave it a deep rich flavor and the chestnuts gave it a hearty texture. I didn’t add any extra liquid and my broth was salty enough so we didn’t need to add salt. The color was quite pleasing. The fake creme fraiche was made by whisking together some warmed cream cheese and milk. A nice photographic substitute.

I’ll definitely do this one again.