I promised I’d go back and blog about some previous kitchen adventures, so I’ll start with our Pasty Party last August.

I’m lucky to have friends who are great cooks. Bob and Dianne Armitage used to own a restaurant in Iowa. One of Bob’s specialties is Cornish pasties. His grandma used to make them. Bob says the miners in Wales took pasties to work for their lunch. Sometimes the pasty was divided… half meat and half fruit.

For those who haven’t had them, a pasty is a meat-filled turnover, sealed so the filling doesn’t fall out. They are usually made with a meat and root vegetable filling. The secret ingredient is suet (the fat that surrounds the beef kidney). The first time we made them together, we couldn’t find suet anywhere. Bob searched all over town. We had to settle for another type of fat for our filling and pastry.

Then when I was interviewing John de Bruin for my grass-fed beef article, he told me that Dey Dey’s beef sells suet. I quickly made a mental note to rush to the computer when I got home to email Bob that I’d found it!

At the next Sunday Farmer’s Market I ordered a lot of beef suet and explained to John’s wife Nadine what I was planning to use it for. She offered to bring the suet to my house and make pasties with us.

We all agreed that we should make a LOT of pasties. That meant peeling a lot of potatoes, parsnips, and turnips. 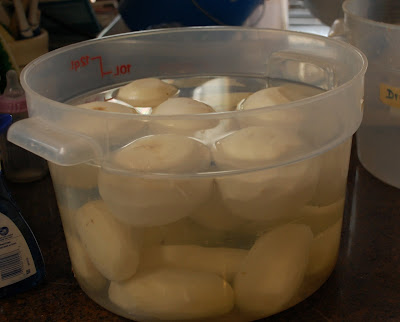 Once they were peeled we cubed them and added minced garlic. Hmm, not enough garlic. Bob sent Dianne out to buy more garlic. There’s also some parsley in this mix and a lot of diced (she wipes away the tears) onions. 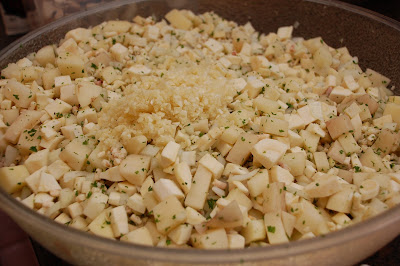 We used pork and Dey Dey’s beef with the turnips, onions, and potatoes for one batch. 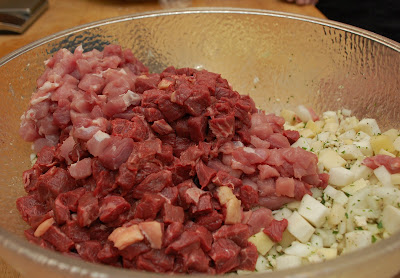 We diced our meat about the same size as the vegetables. 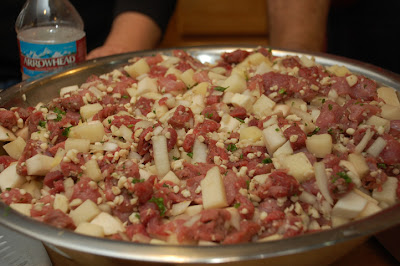 We also made lamb pasties with parsnips and mushrooms.

I made the pastry dough ahead of time and chilled it. 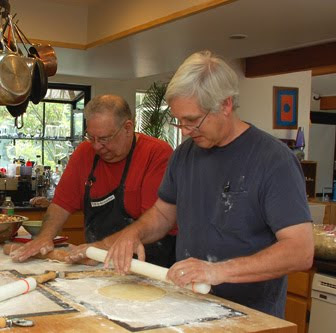 The next step was for Bob to show us how to roll the dough and form the pasties. 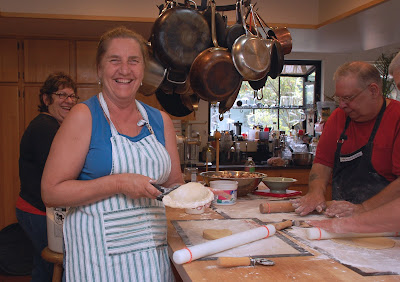 Nadine made the first pasty. 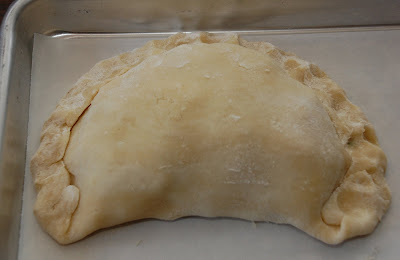 Beautiful!
Bob told us that the folded edge around the pasty was traditionally made wide and thick so the miners could hold onto it while they ate the center of the pasty. The miners probably didn’t have clean running water to wash their hands before eating. They didn’t eat the edge… unless they were really hungry. 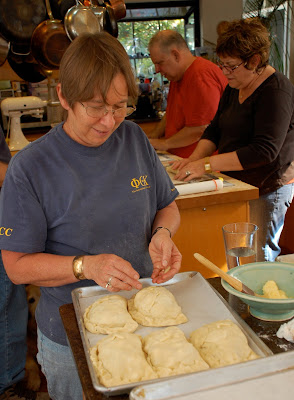 We had to figure out how to distinguish the lamb from the beef/pork pasties so I used my alphabet cookie cutters to put an “L” on each lamb pasty. 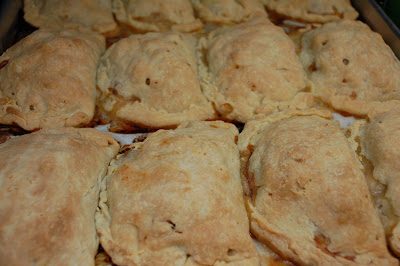 We baked the pasties until the tops were nicely browned and the juices were flowing from the cooked meats. It took about an hour. The final step was to brush the top of each pasty generously with melted butter.

Dianne said that back in Iowa, Bob’s pasties sold out quickly as news would pass though town that they were available. We were not surprised.

A recipe? Bob doesn’t need a recipe. Use your favorite unsweetened pastry dough and design a filling based on your own tastes. I’ve made pork pasties with butternut squash, potatoes, and kale. You could also make a vegetarian pasty, but use plenty of oil or a sauce in the filling so it doesn’t taste dry.

Bob came up with some great ideas for a Thanksgiving pasty. We’ll keep you posted.