My daughter-in-law Kris showed me a recipe she had for Easter Dragon Breads and suggested we try it for Easter. The dragon is about the size of a medium baguette and has a red-dyed egg in it’s mouth.

We tried dying brown eggs with a pureed beet. Brown is not the best color to start with for this and the dye didn’t really get absorbed into the eggshell. The bread recipe was kind of boring and the thin parts (the feet) tasted like crackers. I didn’t take any photos so you’ll have to trust me that the result was disappointing.

I decided to use my reliable cinnamon roll dough for the bread and use cloves instead of small balls of dough for the eyes. I also wanted to make smaller dragons so I used malted milk Easter egg candies instead of the full-sized red egg. 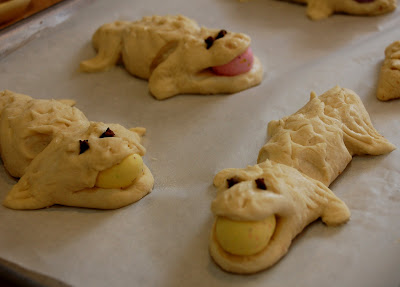 Note that the legs are folded out from slits cut into the sides of the body and then pressed with a fork. These looked pretty hopeful at the rising stage. I liked the multiple color choices for the eggs.

When fully risen, I brushed each one with egg wash so the dragon’s skin would develop a nicely browned color as it baked. 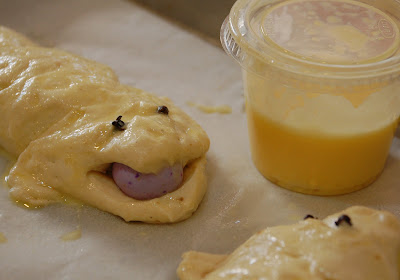 At this point they were beginning to look a little more like fish than dragons but I was still hopeful. 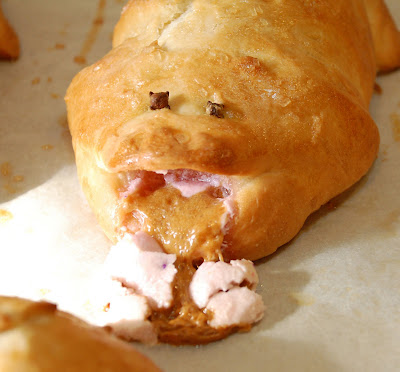 Surprise!
Disgusting! Okay, this is not the effect I had been expecting. I should have realized that when a malted milk egg reaches 350 degrees, it will melt. What was I thinking?

And the final shape looked more like a flounder than a dragon. But the flavor and texture were perfect. I’d rolled cinnamon into the center before I shaped the dragon, so we enjoyed eating them anyhow.

Next stop was the Japanese market in Goleta to buy some quail eggs. This time I used vinegar with the beet juice when I dyed the eggs. It worked better but the dye tends to bleed a bit. I also decided to skip the slit and fold technique for the legs and go with separate pieces of dough. 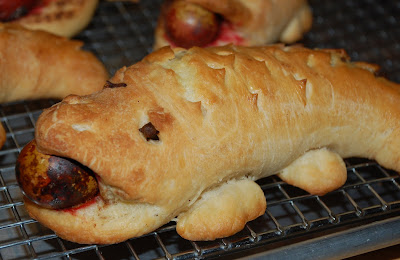 Voila! This one looks pretty good. Not intimidating, but far more like a dragon would be expected to look. The quail eggs are perfect but next time I’ll use standard Easter egg dye.