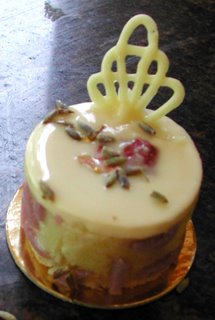 This is not the final version but it’s close enough that this photo can be a placeholder for now. The cake wall will be lavender and white, but it will probably be lavender diamonds against white. This is one of my newly-piped summer coating decorations… which hasn’t bent over from the heat… at least not in the first five minutes. Note that the white chocolate ganache on the top has begun to flow. My newer version of the ganache is a bit more stable in the heat.

I just received a bag of professionally crystalized rose petals to use on the final version, but I’m still waiting for the decorating grill to make the diamond cake wall.

You probably can’t see it here, but there are a couple of flecks of gold on the top. I ordered $35 worth of pure (edible) gold flakes but I have no idea how many flakes are actually in the box because it’s opaque and they don’t make noise when you shake it. I think they weigh a gram, so it could be a lot because they’re so light that they get caught on wind currents when you try to shake them out of the holes and there’s no way you can get them to hit the cake. You have to put them onto waxed paper and flick them one-at-a-time onto the cake top. There’s probably a better way but I haven’t found it yet. It’s a bit of work, but I think we all need to eat a little gold at least once in our lives and Kris and Shaun’s wedding is a good time to do it.