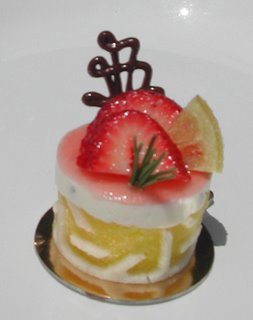 This one was finalized (approved by Shaun) and photographed today.

The trickiest part was getting it photographed before the chocolate decoration melted. Due to the rather hot weather we are experiencing here in Southern California, real chocolate turns to putty in a matter of minutes and a puddle soon thereafter. My next piping session will be using chocolate colored summer coating to make the decorations.

Choosing the cake wall is what gave me the hardest time. I tried green and white but it looked like a watermelon with the strawberry glaze on top. That would have been a surprise to bite into. I also tried other variations of white and yellow that didn’t work so I tried brown and yellow, which worked… but we liked this one better.

The mousse filling is made with mascarpone and lemoncello. There’s a frozen rosemary cream insert that defrosts in the center of the mousse and leaves a rosemary accent. The lemon wedges are crystalled. Even the fresh rosemary tastes good in this combination but I suspect most people won’t try it.

The really bad part about this project is that I ate half of the cake while I was cutting the cake walls yesterday. I like to believe that scrap calories don’t count, but I don’t want to test that theory too thoroughly. I’m pretty relieved that the tasting part is almost over… I say almost because there is still of tray of them in the refrigerator. Help!!