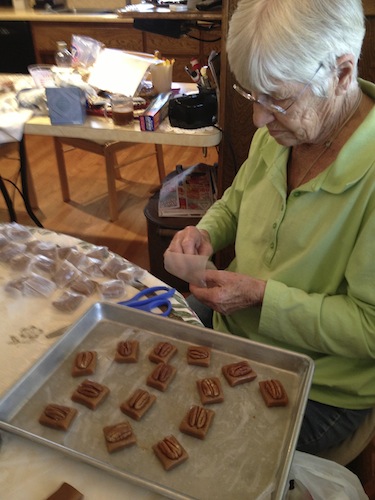 My friend Loretta is 85-1/2. She grew up on a dairy farm in Wisconsin during the Great Depression, one of 13 children.

We’ve been friends for about 38 years. Recently, I’ve been helping her organize her recipe file, gathering food stories to add to her recipe cards.

Yesterday we made caramels together from her mother’s recipe. She’d talked with her sister the night before and gotten some tips—like chill the caramels 5 minutes in the freezer before scoring. Loretta asked her sister, “How did Mother do it? She didn’t have a freezer!” Her sister pointed out that the porch was her mom’s freezer. She made caramels in the winter when there was snow outside. A few minutes in the snow firmed those caramels right up.

I brought my fancy new spatula/candy thermometer and the ingredients. Loretta measured and I stirred. When the mixture reached 250 degrees we poured our satiny caramel onto a buttered sheet pan and after a short time in the freezer we pressed  pecan halves into the cooling caramel. 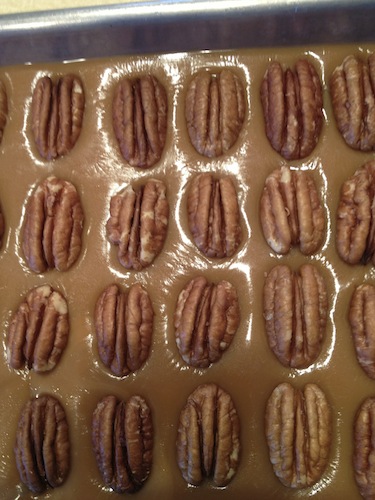 The next trick was to cut between pecans… after waiting for the caramel to cool enough to cut it with a knife. 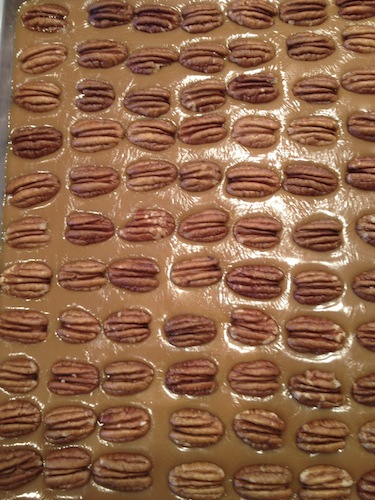 Being impatient to get to the eating part we started cutting too soon and had strings of hot caramel hanging from our knife, so I grabbed a pair of scissors, which cut cleanly between each pecan. Loretta wrapped while I cut. 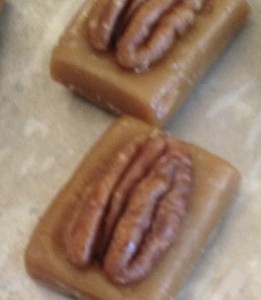 Yeah, some of them didn’t make it to the waxed paper wrapping part. We also made turtles. I’ll save that for the next post.

In the meantime, here’s the caramel recipe:

1) Combine all but vanilla and pecans. Bring to a boil and cook, stirring, until the mixture reaches 240 degrees (soft ball).

3) Pour into pan (about 1″ thickness) and put into freezer for 5 minutes.

4) Remove from freezer and press in a pecan half for each caramel. Mark squares with a knife and let cool completely. Then cut with a knife (or scissors) and wrap in waxed paper.