Leslie said we needed a salad to go with the lasagna so Jane, another student, said she’d take care of the salad for us. Jane has a knack for taking whatever food is available in the kitchen and creating something extraordinary with it.

Carlos and I had a zestless orange leftover from the Honey Cake we were making for dessert. The leftover orange segments became a featured ingredient in Jane’s green salad. A search through the pantry also yielded some pumkin seeds, dried cranberries, and raspberry vinegar.

Jane plumped the cranberries with the orange segments by soaking them in a little marinade she whipped up and then went to the stove to pan-roast the pumpkin seeds to just the right flavor and crispness. 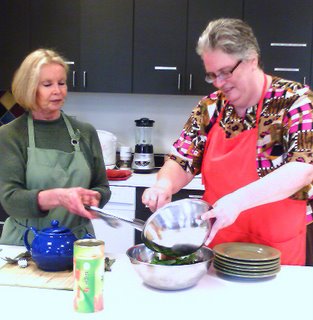 Here she is putting it all together. 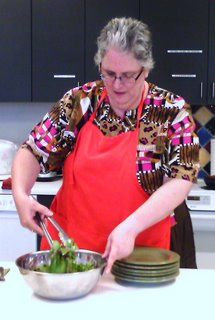 Salad anyone? While we ate Jane’s salad we talked about the flavors in the salad and laughed about the days when salad was a wedge of iceberg lettuce with a dollop of Thousand Island dressing on top.

Oh, the Honey Cake? Well that was a learning experience. It browned too quickly in the 350 degree oven and then sunk in the middle, probably because I jiggled it putting foil over the top to slow the browning while the center baked. Even then, by the time the center was set, the outer edges were overcooked.

Carlos suggested that it would be better with less honey so that you could taste the more subtle orange zest, coffee, cinnamon, and clove flavors. He’s right. Less sugar would also keep it from carmelizing so quickly at the surface. And maybe baking it in a bundt pan or two loaf pans, rather than a square pan, would allow the heat to penetrate to the center more quickly. Of course that didn’t keep us from eating it!